Budapest baths have a century old history, and so does Gellert Spa Bath.

The knights of St John in the 12th century, or the medieval Turks in the 16th century have already discovered the caves and the natural geothermal pools under Gellert Hill literally centuries ago. And we have still been using the vast spring water resources for their fantastic curative and meditative potentials every single day since then. Indeed, Budapest is the City of Spas: visit Gellert Spa to enjoy her world famous waters, and feel history on your skin.

In the 13th century, the Hungarian King Andrew II had a small hospital erected at the foot of Gellert Hill where the spring water pools were offering ways to heal, clean and get calm. The hot waters were pushed to the surface.

The hot spring waters of Gellert Spa have been recorded in Hungary’s chronicles since the 15th century. Hungarian histories written in the Middle Ages let us know that the deep underground waters under the hills of Buda, the hilly side of Budapest, have been used for many centuries. Wells and pools of miraculous healing powers have been popular among Hungarian monks, the Knights of St John, hermits, Turkish soldiers and pashas. The thermal baths were incredibly popular by the 19th century when more and more Budapest citizens and foreign travellers wanted to get the benefits of aqua therapy, new pools, new baths were built to cater for the huge demand for relaxation, spa treatments, and water fun.

In the 16th century, when the Ottoman Turks occupied the Hungarian Kingdom and captured the royal palace known as the Buda Castle atop the Castle Hill, there was a Turkish Bath built in the present place of Gellert Spa. This Turkish bath was called Acik Iliye, according to the prolific medieval Turkish traveller and travel writer, Evliya Celebi of the Ottoman Empire. To quote from his works*:

They are visiting the hot springs on coaches. It is useful for the French disease and 7 more diseases. The bath is to be used in the following manner: once your body is red hot, you are to come out of the pool, and keep yourself warm.

In 1686, after the Buda Castle Siege, when Buda was recaptured from the Turks by the Austrian Army, the bath became the property of the home doctor / personal practitioner of Leopold I, the Holy Roman Emperor, King of Hungary and King of Bohemia.

In the 17th century, the natural mineral pools by Gellert Hill were known as Muddy Pools (Sarosfurdo) where the murky waters were mixed with lots of mineral rich mud, thick fine and silky mud layers sitting at the bottom of the naturally hot spring water pools.

By the 19th century, fine buildings were erected to give access to the healing waters in a more civilized manner. The bath was named after St Gellert (St Gerhard) just as the hill (St Gerard Sagredo, the Italian bishop who was the first bishop of Hungary in the 11th century, the knowledgeable tutor of the first Hungarian King, St Stephen who played a pivotal role in converting the Hungarian pagans into Christianity)

The original bath building of Gellert Spa and Baths was destroyed at the end of the 19th century to give way to the newly constructed Liberty Bridge (Szabadsag Hid).

At the same time, a new and ambitious design was realized for the world class bath, St Gellert Spa Baths. Many tenders were submitted, and eventually the most precious plans for a beautiful Art Nouveau palace were accepted.

The new building was a complex of a Budapest spa hotel and the thermal bath: the Danubius Hotel Gellert and the Gellert Spa & Thermal Baths. Now one building but two institutions.

Gellert Spa & Thermal Bath got its ultra modern wave pool in 1927, which has been in use ever since, although many assume that it was an addition in the 1980s.

Gellert Spa is today one of the leading thermal baths in Budapest with complex spa, beauty and aqua-medical treatments, salt chambers, massages, and even with a private bath for those who enjoy privacy. In addition, Gellert Spa has become one of the special event places in Budapest with contemporary Fashion Shows, art exhibitions, private corporate events, concerts, and the extended venue of festivals in Hotel Gellert (e.g. the New Wine Festival in Gellert) 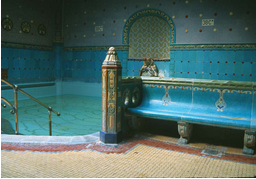 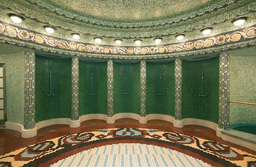